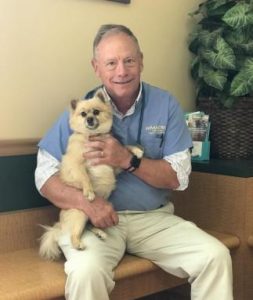 Dr. Griffin has four dogs: Daisy, Mia, Angus, and Bonnie. He has two cats: Keke and Tubby, along with three horses and chickens. He enjoys his time at Crossfit, cooking on his big green egg, reading, and playing golf in his free time.

Dr. Lane was born in Johnston County and moved to Stanly county in 2015. She graduated from North Carolina State University of Veterinary Medicine in 2006 and joined West Stanly Animal Clinic in August of 2014 and enjoys working with all of her patients.

Dr. Lane states that her Kindergarten teacher asked her class “what do you want to be when you grow up?” and she answered “a veterinarian or a horse trainer.” She has always loved science and has been curious about how things worked and helping animals, so it just seemed like the perfect fit.

Her favorite part of her job is watching a sick animal recover and go back to being the loved member of their family that they were before. She also enjoys educating people on how to make the best decisions for their pets so that they can live a long happy life!

Dr. Lane lives with her husband in Albemarle and has a grown daughter and shares two young stepsons with her husband. She and her family have a Yorkie-mix Bonnie and a Siamese-mix named Betsy. In her spare time, she loves riding motorcycles, shooting and collecting guns, and listening to live music – preferably local bands. 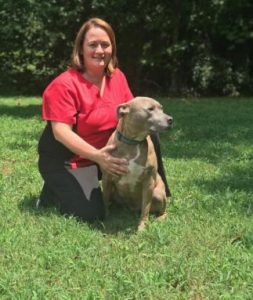 Dr. Osborn is originally from Stanly County and graduated from North Stanly High School. She attended Gardner Webb University receiving a BS in Biology. She gained much experience as a veterinary Assistant after college and later attended NC State’s College of Veterinary Medicine graduating with her DVM in 2008.

Dr. Osborn joined our veterinary team in August 2016. She enjoys just about all aspects of veterinary medicine including preventive medicine and surgery.

Dr. Osborn has a wonderful family with her husband Steven, three boys (Bryce, Blake, and Isaac), and two dogs (Riley, and Sierra). In her free time, she enjoys spending time with her family and friends. 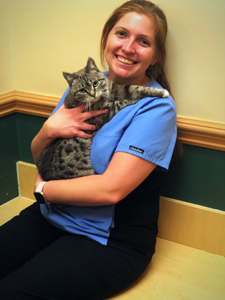 Rachel is from Stanfield and graduated from West Stanly High School in 2011. Her love of animals brought her to being part of the West Stanly team in September of 2016.

The favorite part of Rachel’s job is having the opportunity to ensure her patient’s health during and after surgery, as well as helping clients establish great dental care for their pets.

Rachel has an American Bulldog named Buddy, a long-haired Chihuahua named Cotton. She enjoys going on trips to the mountains with her husband and dogs. 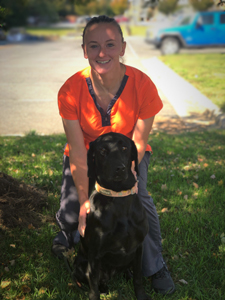 Sara has been a Veterinary Assistant with West Stanly Animal Clinic since April 19th of 2018.
She was born and raised in Stanly County, Sara started as a kennel assistant in 2012 to help pay for college. After that, she stayed in the vet world since she loved helping animals.
Sara’s family consists of her two twin boys who keep her on her feet at all times! She also has 6 horses. Whenever she isn’t working, she and her husband love to go trail riding and camping.

Austin was born in Georgia and resided there for a short time before he moved to North Carolina. He has a high school diploma and his course of study was in agriculture; more specifically Animal Science both Large and Small. He has lived here since he moved from Georgia 18 years ago.

He began working in the veterinary industry because he has such a strong passion for helping and assisting others, this also includes animals of all sizes. His favorite thing about working with animals is knowing when he assists in helping an animal recover it gives him peace of mind in knowing he helped potentially save a life and that family or person still has their companion or best friend.

He knew he was in the right profession since his first week at the office, there was a large breed dog who had a bad infection in his pelvic region. The dog looked miserable and Austin was scared they would have to put him down, but once they got him back for an exam, blood test, and x-ray they found out it was easily treatable. Once they gave the dog the right medications and sent him home, Austin was relieved in knowing he assisted in saving that animal’s life.

Austin has a semi-big family mostly consisting of four sisters and two brothers. His ultimate goal is to go to college and get his degree in veterinary medicine. He’s a fervent outdoorsman and conservationist. He’s also an amateur boxer and martial artist, who has always loved the arts of fighting; some may say it runs in his family.

He has an interest in cooking and culinary and is always looking for ways to improve or create new food dishes. Austin also has an interest in farming mostly due to being raised and working on a local farm, however, it is something he does not want to do for the rest of his life. Austin was a former firefighter/first responder, this is where he believes his drive to help others increased.

Shirley has been a professional pet groomer and business owner since 1998 and has been grooming at West Stanly since 2015!

She started her grooming career in 1973 at the age of 14 and is still showing and grooming today. She also began an apprenticeship in Leading Toy Poodle Kennel in 1976.

She decided to groom pets at West Stanly so that she had the opportunity to work with a great vet team and techs.

Shirley knew that she had chosen the right profession when she was at her first week working a Show Poodle Kennel and it was never felt like it was work – she enjoyed herself with all aspects of working with the dogs.

When she’s not working, Shirley raises breed & show champion australian shepherds that compete in AKC shows, agility, herding, obedience and most importantly – all around pets!

Her family is made up of her husband Tim, their two daughters, six grandchildren and two sons-in-law. 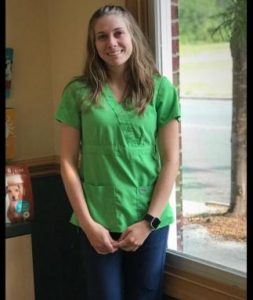 Jessica grew up in Stanfield and graduated from West Stanly High School (where she met several of her co-workers), eventually moving to Albemarle. She joined the West Stanly team in 2017 and has enjoyed being one of our friendly receptionists.

While Jessica loves being able to work with clients and their pets, she truly enjoys establishing bonds with all clients and having the ability to help educate them.

Jessica lives with her husband, 4 dogs, 4 chickens, 2 snakes, 5 fish, a hedgehog, a bearded dragon, and a chameleon. In her spare time, she enjoys bargain shopping and caring for reptiles. 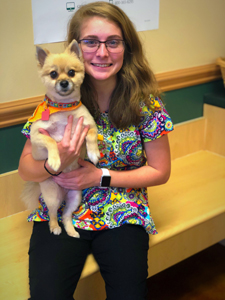 Dana has been a receptionist at West Stanly Animal Clinic since September 1st 2020.

Born and raised here, Dana is a senior at West Stanly High School and is currently taking the veterinary assistant course. Her favorite thing is that animals may come in sick, but she gets to help make them better!

Dana was raised around animals, so wanting to work with them as a career came as second nature to her.

When she’s not at the clinic, Dana enjoys fishing and hunting.

We use cookies on our website to give you the most relevant experience by remembering your preferences and repeat visits. By clicking “Accept All”, you consent to the use of ALL the cookies. However, you may visit "Cookie Settings" to provide a controlled consent.
Cookie SettingsAccept All
Manage consent

This website uses cookies to improve your experience while you navigate through the website. Out of these, the cookies that are categorized as necessary are stored on your browser as they are essential for the working of basic functionalities of the website. We also use third-party cookies that help us analyze and understand how you use this website. These cookies will be stored in your browser only with your consent. You also have the option to opt-out of these cookies. But opting out of some of these cookies may affect your browsing experience.
Necessary Always Enabled
Necessary cookies are absolutely essential for the website to function properly. This category only includes cookies that ensures basic functionalities and security features of the website. These cookies do not store any personal information.
Non-necessary
Any cookies that may not be particularly necessary for the website to function and is used specifically to collect user personal data via analytics, ads, other embedded contents are termed as non-necessary cookies. It is mandatory to procure user consent prior to running these cookies on your website.
SAVE & ACCEPT